T/E GrassRoots Growers (GRG) is an off-shoot of the Tamworth/Erinsville Community Development Committee (T/ECDC).  We are a community-based group whose main activities are to encourage interest in local and organic food production, from the home garden to the market.  We strive to raise awareness of issues surrounding food production in general, and improve our practical knowledge of gardening.

Since October 2009 we have provided free seminars and workshops on a range of topics related to vegetable and flower gardening and the food we eat.  We have also hosted seed and book exchanges and held a film night. Each spring we organize a plant sale and throughout the year take part in special community occasions and initiatives.  As our membership grows, our gardening knowledge base and networking opportunities also grow. 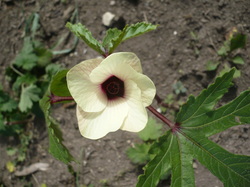 blossoming okra
Below is a list of our past events, with our most recent events listed first. Be sure to check our "Photo Gallery" for photos from some of these events!

October, 2019 - "Wild Foods in Your Own Backyard" with Blair Richards-Koeslag

April, 2019 - "Container Gardening: Drama for Every Season" - with Paul Zammit

October, 2016 - "The Good, The Bad & The Ugly: The Wild Side of a Garden" with Professor Michael Runtz

May, 2016 - Our 7th Annual Plant Sale was held at Lions Beaver Lake Park in Erinsville.

November 2015 - Bruce Bostock, a well known and nationally respected arborist, presented "The A to Z of Trees" to an attentive audience at St. Patrick School in Erinsville.

May 2015 - Our 6th Annual Plant Sale was held at Lions Beaver Lake Park.

February 2015 - Titia Posthuma of Ravensfield Farm spoke on "The Inner Workings of Soil" at St. Patricks School in Erinsville.

December 2014 - GrassRoots Growers members participated in the Tamworth Santa Claus Parade. Many were dressed as "pollinators."

November 2014 - John Wise from Wiseacres Farm spoke to a large group on the subject of "An Organic Farm Ecosystem." This talk was held at Christ Church in Tamworth.

July 2014 - Tickets to our Annual Mystery Garden Tour were quickly sold out and those in attendance enjoyed touring two very different gardens; Miracle Green Farm in Enterprise and Hooper's Mill in Newburgh.

May 2014 - Our 5th Annual Plant Sale took place under sunny skies at Beaver Lake Park. Once again our members provided us with an enormous variety of plants to sell and our buyers had plenty to choose from!

April 2014 - Tom Brown and Susie Meisner presented "Spindletree Gardens: A Story in Pictures" to a large and enthusiastic group at the Tamworth Library.

March 2014 - "Growing Food" Roundtable, Q&A and Seed Exchange - There was a large turnout on a snowy evening at the Tamworth Library. Invited experts Brian Burt, Cam Mather and Karen ten Cate shared their views on various local food initiatives and then answered gardening questions from the audience. A seed exchange, refreshments and lots of networking followed this.

December 2013 - A large group of GRG members participated in the Santa Claus Parade, dressed up as gardeners or other garden-related items and carried witty seasonal signs.

October 2013 - "Preserving Your Garden's Bounty" with guest speaker Angela Moore and a panel of local experts who shared their expertise on canning, freezing and drying foods. Afterwards those in attendance sampled many delicious preserves shared by our panel members.

May 2013 - The GRG 4th Annual Plant Sale took place at Beaver Lake Park and was a great success -- lots of interesting plants and lots of eager buyers.

April 2013 - Grow Wild: Gardening to Attract Birds, Butterflies and other Pollinators, a talk given by native plant expert and author Lorraine Johnson.

Jan. 2013 - Preparing for this Year's Garden:  A demonstration by Colleen Martin-Fabius on seed planting, a seed exchange, a sale of books and magazines.

Oct. 2012 - The Lawn Dilemma, a talk given by award-winning gardener Paul Fritz, presents the audience with creative alternatives to grass lawns. A Seed Exchange was also held on this occasion.

July 2012 - Carolyn Smith and Mary Jo Field welcomed GRG members to a Garden Tour showing a wide variety of vegetables and perennials and answering questions on all aspects of their horticultural success.

April 2012 - Ed Lawrence, call-in host of CBC's noon hour gardening show, entertained and enlightened a sold-out crowd with his expert advice on Tips Tricks and Techniques for Pesticide-free Gardening.   Ed, author of "Gardening Grief and Glory" kindly signed copies for all who wished.

Feb. 2012 - Brian Burt, co-owner of Burt's Greenhouses, and Ken Allen, author of "Sweet Potatoes for the Home Gardener" enlightened us on the growing, curing, propagating and storing of Sweet Potatoes.

Nov. 2011 - Cam Mather, author of "The All You Can Eat Garden Book" explained ways of Making Local Food Work, including marketing methods and the WWOOFer Program for finding seasonal help.

Oct. 2011 - Carol and Robert Mouck, experts in organic gardening and heritage seed saving, outlined the various steps in Organic Growing and Storage of Produce and Seed.

Aug. 2011 - GRG participated in Erinsville's 175th Anniversary Celebration with its own stall and offered two lucky draw prizes; a basket of organic produce donated by members and Cam Mather's  "The All You Can Eat Gardening Handbook".

April 2011 - Tom Pawlick, author of "The End of Food", gave a talk on Food Security, emphasizing the importance of our understanding how the food industry works.

Feb. 2011 - Martha Embury, Manager of Embury Farms, introduced the film Food Inc. that deals with issues around the industrialization of today's food production.

Feb. 2010 - Keith Squires, owner of The Country Squires Garden Centre, presented a talk on Scree Gardening, a method of growing plants requiring a minimal need for watering, fertilizing or attention of any kind.